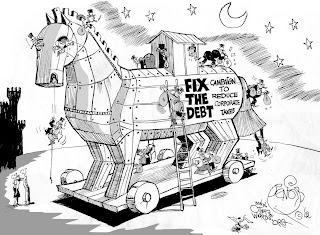 ~ The US Debt Clock, which tracks total US national debt, is the passive voice of fiscal alarm—it doesn't name the subject who inflates that debt. Debt happens! The Anti-Debt Clock is the active voice—it names the wealthy and corporations as major contributors, and quantifies their influence in real-time.

Washington State leads the nation in regressive taxes—the gulf between the heavy tax rates on the less well-off and the wispy rates on the wealthy. Yet we are told by the austerity caucus that we must redress our fiscal problems on the backs of those least able to afford it. That's not fixing the debt; it's fixing the system.
Posted by Unknown at 11:34 PM