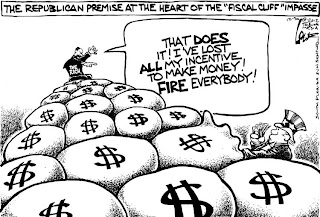 ~ The inaptly named fiscal cliff has been (temporarily) averted in a deal that, in part, raises taxes on the so-called job creators.

We've been hearing for years—decades even—that higher taxes on the rich would cause them to stop hiring and investment.

Now that their taxes have gone up, let's all pay attention to see whether they actually throw that petulant fit they've been threatening for so long. I'm guessing not.


At least not right away. With the unfortunate and ill-advised lapse of the payroll tax cut, however, taxes are going up on everyone who works (thanks GOP), which will reduce the discretionary spending of many, especially those at lower income levels. It's not clear how big an effect that will have, but if it leads to lower consumer demand then we might expect at length a softening in employment and hiring. Should that occur, we must take care to ascribe the cause correctly—slackened consumer demand from payroll taxes, not a lack of incentive by beknighted "job creators."

Finally, it's worth remembering who are the true job creators. This week, notwithstanding higher taxes, I hired my first full-time employee at Phytelligence. But then I don't make anywhere near $450,000 per year. If I were making (much) more money, would I have chosen instead not to hire anyone?
Posted by Unknown at 11:12 PM