How Large Tech Companies Organize Themselves

~ Regrettably, too many small companies emulate the larger ones. 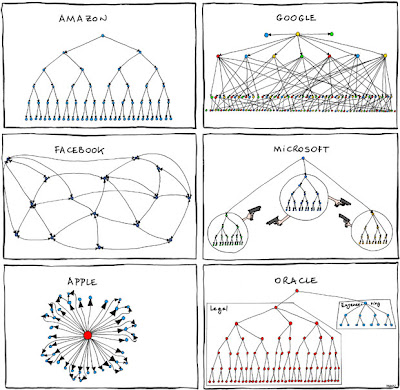 Yes, these charts are a joke, but funny because there's no small amount of truth to them.

Interestingly, the leaders of each company appear to think their organizational style best. I was at Microsoft 12 years, and this "organization" was taking hold when I left in 1993. I've been at a startup in the Apple style (but with a leader who shared only Jobs' micromanaging arrogance, not his brilliance.) Both environments are toxic. The others surely are problematic too.

What would the best organization be for a startup? None of these, clearly, but a hybrid of the Amazon and Facebook styles would be about right—clear direction from the top, and accountability, but lots of sideways connections that promote communication, reward bright ideas, and keep the entire team tracked to the same mission. It wouldn't work for a larger company (and Facebook's engineering and user-interface dysfunction proves it) but for small teams too much hierarchy is fatal.
Posted by Unknown at 10:27 PM