And An Island Never Cries 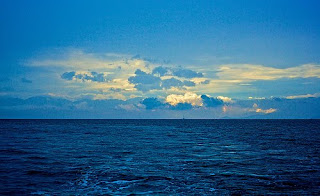 ~ Some continue to deny, against a flood of evidence, that ocean levels are rising. Such denial is easy if you dismiss reason and ignore your lying eyes. And that's what it takes when an entire island is swallowed by the sea:


A tiny island claimed for years by India and Bangladesh in the Bay of Bengal has disappeared beneath the rising seas, scientists in India say.

The uninhabited territory south of the Hariabhanga river was known as New Moore Island to the Indians and South Talpatti Island to the Bangladeshis.

"What these two countries could not achieve from years of talking, has been resolved by global warming," said Professor Sugata Hazra of the School of Oceanographic Studies at Jadavpur University in Calcutta.

Professor Hazra added that sea level rise in the Bay of Bengal  has accelerated over the past decade and the overtopping of other islands in the region in the next decade is likely. No one lives on these islands. Others are not so lucky.