The Death of Oceans 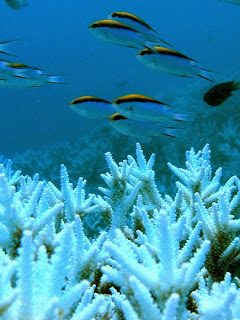 ~ I've written before about ocean acidification, gyres of plastic and species loss. A new report raises alarms over the quickening in the destruction of the oceans' vitality: it's getting worse and faster than previously thought. Coral reefs, fish species and the life in many parts of the ocean could be lost within a generation, perhaps never to return, according to Dr. Alex Rogers, scientific director of the International Programme on the State of the Ocean (IPSO):

"As we considered the cumulative effect of what humankind does to the ocean the implications became far worse than we had individually realised. This is a very serious situation demanding unequivocal action at every level. We are looking at consequences for humankind that will impact in our lifetime and, worse, our children's and generations beyond that."

Mass extinction events have happened before in earth's history, and there has long been some debate about their causes. There is a mass extinction event unfolding right now in our oceans and conditions are very similar to those of prior such events. This time, however, the causes are directly observable and crystal clear. On a physical level, the causes are rising atmospheric carbon dioxide being absorbed into the ocean, over-fishing, and using the ocean as a garbage dump. The cause is a continuing failure to make sustainability of our oceans a priority. On a different level, it is another manifestation of the tragedy of the commons, the despoiling by private interests of public resources. At a basic level, indeed a base level, it is sheer cupidity. When will we realize that the profits of a few do not (or must not) come at the cost of permanent destruction on a global scale?
Posted by Unknown at 11:56 PM