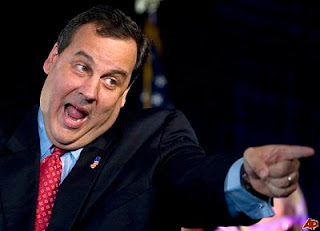 ~ New Jersey's corpulent chief has pulled out of RGGI, the Regional Greenhouse Gas Initiative. The original 10 northeastern states, now minus New Jersey, will carry on without the participation of the Garden State.

At a morning news conference, the governor asserted that New Jersey was succeeding in reducing its carbon dioxide emissions not because of the multistate program, known as RGGI (pronounced Reggie), but because it is relying more on natural gas and less on coal to fill its energy needs.

“RGGI does nothing more than tax electricity, tax our citizens, tax our businesses, with no discernible or measurable impact upon our environment,” Mr. Christie said.

A transition away from coal to (relatively) cleaner natural gas helps for now, but there is no guarantee that natural gas will remain at its current bargain basement prices. If the economy ever returns to a brisker growth pattern there will be pressure to provide more electricity by whatever means, including coal. The Governor is very unlikely to complain about emissions if he thinks economic growth depends on the power production that causes them.

Mr. Christie called RGGI “a failure,” citing a problem that has dogged the program: power suppliers have easily met their caps, and carbon allowances are trading at bottom-level prices because plants are taking advantage of cheap prices for natural gas, which is less polluting than fuels like coal.

But advocates of the system say there is a simple fix: lowering the caps to require further reductions in emissions. And carbon market experts point out that an economic recovery could cause emissions to soar again, increasing the price of carbon allowances.

“A lot of things can happen that can push emissions back up, so being in a system that caps emissions would ensure your emissions remain low,” said Emilie Mazzacurati, a market analyst at Thomson Reuters Point Carbon.

Christie chose to abandon RGGI because (in his stated view) it is unnecessary in the current economic climate, a foolish and myopic decision. It is rather like a hockey goalie pitching his mask over the glass because the puck is at the other end of the rink. What happens when the players skate back? When gas prices rise again, as they surely will, what then? Will Christie re-adopt RGGI? Of course not; the currently favorable pricing for natural gas is merely a pretext to do what ideology demands: purge anything that anyone in his army of ideological zombies labels a "tax."

It's also deeply disingenuous for Christie to criticize programs such as RGGI for being inadequate. He and others hostile to taking action on climate change have no demonstrated interest in implementing effective solutions. It's not as if they are working to come up with a better program that addresses the problem, such as adopting a carbon tax like that conservatives have successfully implemented in British Columbia. Their approach is instead to attack and dismantle any such program, while bitterly spewing a litany of specious and unfounded accusations about supposedly negative economic impacts. The facts do not support what they say, so they compensate with vehemence.

RGGI has generated $700M in revenues to participating states which has been used for cleantech investment as well as general budgetary support. New Jersey has banked $100M over the program's lifetime.
Posted by Unknown at 11:52 PM