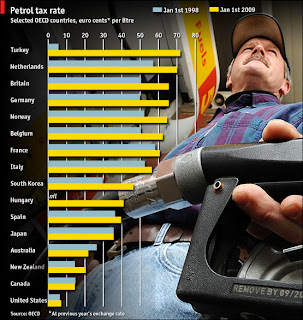 ~ GM's CEO, Dan Akerson, says Congress should raise gax taxes $1 per gallon. Seriously. The catch? Do it in lieu of more stringent mileage standards for cars. His reasoning: the challenge of dealing with externally imposed fuel efficiency standards (and the timelines to implement them) is too hard. Better, he says, to let consumers, presumably driven by higher gas prices, to select more efficient vehicles.

Such magic-of-the-marketplace solutions would be great if there really were some magic there. Most likely under this scenario, alas, is that consumers would choose form over function, and pick stylish rides over sensible transportation. Even those who opt for fuel efficiency would necessarily choose from what the automakers present; the car most parsimonious with gas might be less so than one that responded to higher fuel standards.

So Akerson gets an A for ingenuity, but a lesser grade for the worth of his suggestion to promote energy efficient autos and reduced fossil fuel consumption.

Still, a gas tax is a good idea anyway. Our gas prices are comparatively low, there's a lot of transportation infrastructure that needs funding, people would drive less, and it would be a great impetus in the inevitable transition away from fossil fuels.