All Aboard the B Ark 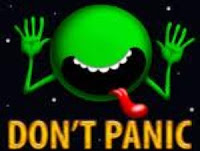 Is consolidating trash collection and starting curbside recycling another slip down the slide to socialism? Yes it is, say some Arizona teabaggers. They're also unhappy that they can no longer pick from 5 overlapping trash haulers. Some have termed it "trashcare" to echo their distaste for recent healthcare legislation, called "Obamacare" by opponents. Their bile has risen nearly to pitchforks and torches level:


Last week, a flier was circulated around Fountain Hills with an ominous icon and the phrase, "The Hills Will Have Eyes," and that claimed the "Fountain Hills Green Police" checked residents' garbage and recyclables, and as a result, "you are wanted for questioning." ... That single issue generated a nearly five-hour public hearing and council debate that went past midnight.


It seems counterintuitive, but in order for this proposal to pass, I believe I had to downplay the benefits of recycling. When ideology prevents rational discussion of a really pretty mundane topic, trash, there is no perspective. Everything is suspect, which paralyzes us.

While I don't normally wade far into the comments, some of those to this article shed light (some of course are just puerile name-calling.) The febrile rantings of some townsfolk about the evils of a "monopoly" are misplaced since the council used a sealed-bid RFP process and the contract has a fixed term. The result is a better deal for residents as one hauler saves money through economies of scale, as opposed to several haulers all tracing the same routes but stopping only sporadically at occasional houses.

The real source of the ranting is more likely the curbside recycling and the rationale of reducing the number of trucks and miles driven. Many Republicans and almost all teabaggers reject the science of climate change completely. That their city would do something so evidently and overtly green, and which, however slightly, mitigates global warming, really, er, frosts them.

Hard to understand such vitriolic outrage over something so minor compared to the enormous challenges and real threats we currently face. These people will believe anything, especially if it confirms their bias about government perfidy. Can we not send them away on the B-Ark as author Douglas Adam's fictional race of Golgafrinchans did with their supercilious people?
Posted by Unknown at 11:51 PM