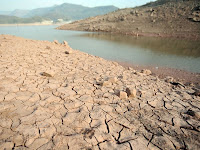 The United States and other heavily populated countries are in danger of experiencing extreme drought due to climate change in the next two decades, warned Aiguo Dai, a scientist from the National Center for Atmospheric Research. Our changing climate will mean changes to the hydrological cycle, the patterns of rainfall throughout the world:


Dai found that two-thirds of Western United States, large parts of Latin America, Southwest and Southeast Asia, regions bordering the Mediterranean Sea and most of Africa and Australia will be significantly drier by 2030.

Much of the northernmost latitudes will see heavier and more frequent rain, although the amount will not make up for the losses elsewhere--the world's largest rivers are losing water to development and over-use. Lakes too. Climate change will exacerbate the problem.

Mr. Dai gathered projections about temperature, rainfall, humidity, wind speed and the amount of sunlight based on current projections of greenhouse gas emissions. He then measured them using the Palmer Drought Severity Index, which classifies the strength of a drought by tracking rainfall and evaporation over time and comparing them with the usual variability one would expect at a given location.

"We are facing the possibility of widespread drought in the coming decades, but this has yet to be fully recognized by both the public and the climate change research community," he concluded.

Amongst other effects, those on agriculture will be profound. With less water, crops will be smaller or fail altogether, and famine will increase poverty, disease and mortality. Income, life expectancy and education will all decline. These are the criteria that the UN uses to calculate the Human Development Index, a measure of the progress in combating poverty and improving people's lives around the world. The growing prospect of long-term drought (and flooding) is but one result of the continuing failure to address climate change, and threatens "decades of progress in improving the lives of the world's poorest people."
Posted by Unknown at 11:49 PM