More on Energy and Sputniks

Yesterday's post covered US Energy Secretary Stephen Chu's address on the importance of government support for energy innovation. Included on the dias at the National Press Club was Arun Majumdar, Director of ARPA-E. Below is a repost from the Hydrovolts blog of 2/20/10 with remarks made by Dr. Majumdar on the "Three Sputniks." 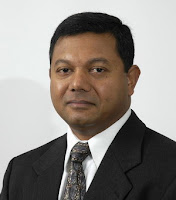 Arun Majumdar, Director of ARPA-E, spoke to about 150 people in the atrium of the Paul Allen Computer Science & Engineering Building at the University of Washington on Thursday. Dr. Majumdar provided a detailed explanation of the role of his agency in building a technology "pipeline" connecting the creators of new solutions to the integrators searching for solutions to the "three Sputniks" of energy security, green house gas (GHG) emissions, and US global technological leadership. He sees these as all connected, composing three axes of the same 3-D reality. We must stop importing 60% of our oil from "places hostile to us" and then burning it, exacerbating damage from climate change. Finding other ways to create the energy we need that are clean and renewable will also power US innovation, economic prosperity, and global leadership. Tackling these Three Sputniks is the Congressional directive to ARPA-E.

The range and scope of the challenges are enormous. He touched on a few examples of what his agency wants to tackle.

We emit 8 giga-tonnes of GHG every year, and the amount is increasing: "at the end of the year you have a huge bill." Dr. Majumdar alluded to the supposed "controversy" around GHG emissions and climate change, but was clear that, as far as he and his agency are concerned, the science is sufficiently settled. Using the always-apt Titanic analogy he dismissed those who first advocated that there was "no iceberg" and then would rather we "move the deck chairs." What is needed is to "turn the ship" and ARPA-E wants to make that happen.

Overlaying a population map of the world with a composite photo of the world at night, Dr. Majumdar noted the mismatch between population and the availability of electricity (using night-time lighting as a proxy.) The problem, he noted, is "if they turn on the lights as we have done, we are all in trouble." Such a dramatic use of electricity would produce an enormous increases in GHG emissions. How can the standard of living be increased in those parts of the world?

Displaying a chart of the energy use by universities in different countries, Dr. Majumdar noted how US universities use 5-10 times more energy for heating and cooling than their counterparts in China. Expanding on the theme, he showed energy use by the city of Philadelphia. Apart from the expected increase in energy cost for heating in winter and cooling in summer, the graph showed non-trivial cooling in winter and heating in summer. "It is like driving your car with the brakes on--why is this?" Systems that are not optimized, poor automatic regulation, and a legacy culture of cheap energy that is no longer true.

Dr. Majumdar summarized the first round of funding and highlighted a few noteworthy recipients. There were 3700 applications under the first round of grants, of which 20-25% "violated either the first or the second law of thermodynamics." After progressively more rigorous screening, the agency selected 37 grants and has funded 36 of them with an average of $4M over a 2-3 year time frame. He praised the "Series A" size and duration of the grants, which he believes can really launch an idea to commercial success. Smaller grants would run the risk of not providing enough for success, especially with the follow-on funding uncertainty of the last year or so. We can expect further funding from ARPA-E to be similarly structured.

Some of the funded grants include:
ARPA-E is "not limited by a lack of good ideas" and is just getting going on its mission. It is "in the early stages, like DARPA of 1958." There is a tension between the "down-stream" "pullers" who integrate technology solutions to build applications addressing real-world problems and the "up-stream" "pushers" who are the innovative creators and sources of solutions. Resolving this tension by building a "pipeline" between them is how Dr. Majumdar is directing his agency to execute on its mission. This approach will also seek to connect basic research with later stage funders such as venture capital. It sounds a bit as if he wants to bridge the chasm! ARPA-E is also establishing a Fellows Program, which will bring in PhDs to form a kind of think tank "like a VC with dollars attached." In response to a later question he added that he thought the distinction between basic and applied research is "artificial" and his idea is to put scientists and engineers--the Fellows--together to break down those barriers he believes are retarding the more rapid advancement of solutions to the Three Sputniks.

Dr. Majumdar recognizes the need to "manage expectations" since he believes it will take 20 years to have a big impact. The next 3-5 years, however, will "provide trajectory" to launch the 20-year "home runs."

The questions ARPA-E will ask in searching for those early trajectory-setting efforts include:
Metrics for deciding were also mostly directly commercial in nature, including such things as market size, number of patents generated, amount of follow-on investment generated, number of new companies launched, and so on. ARPA-E may share much of its name with DARPA, the agency whose genesis and success have largely inspired it, but its approach and guiding metrics are very different in their degree of commercial emphasis. It's a promising change well-suited to our current needs.


We are now faced with the fact, my friends, that tomorrow is today. We are confronted with the fierce urgency of now. In this unfolding conundrum of life and history, there is such a thing as being too late.

The ARPA-E Innovation Summit is March 1-3 and will provide a "platform for PIs who did not get funded to bring their ideas back to expose them to investors and other stakeholders."
Posted by Unknown at 5:49 PM