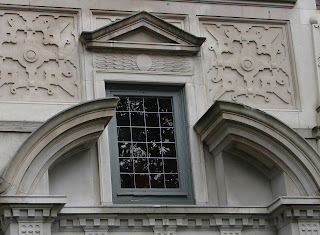 Last week's picture is the back foot of one of Seattle's best known pieces of public art--Hammering Man, by Jonathan Borofsky, located in the entrance plaza outside of the Seattle Art Museum near the Harbor Steps. 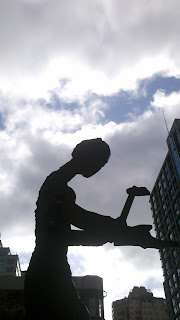 The artist's statement about the piece notes that there are other Hammering Men elsewhere in the US and around the world, including Frankfurt and Seoul. Each has a unique number stenciled on it, Seattle's is #3277164.

In the surest sign of public affection for the piece it was used as part of a famous guerrilla art action in 1994: 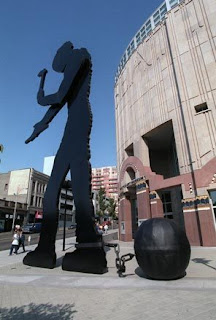 Authorities were horrified, but locals split on the unauthorized addition, with some applauding the political statement of chaining Hammering Man to his job on Labor Day and others fretting about possible damage to the piece. If the purpose of art is to provoke, the action was wildly successful. If art is gauged by the extent to which it fits establishment strictures, not so much; however, I reject any such regimentation. I am reminded of my favorite art teacher from high school, Don Boutros, who, when confronted with too much free-form student activity (such as flicking paint at each other) would only shake his head and lament, "This is not art."
Posted by Unknown at 12:56 PM