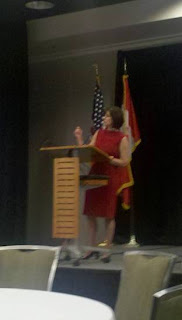 Her main point was to underscore the importance and urgency of acting:

Specifically, she called for significant investment and especially the creation and constancy of a long-term vision. Noting that utilities must look out 20 years or longer, Harris articulated the concern now heard from many business quarters: "I hope [energy] policies are not revisited every year. We can't plan with policies moving around."

Although thought to be staid, utilities nowadays need to be "opportunistic" to meet today's more complicated economic and policy environment. For example, PSE is the second largest utility developer of wind in the US today. Their Hawkins Ridge wind project was the cheapest done at the time and sailed through permitting in a scant 4 months. PSE took the lead on wind development and completed the project before Washington State's RPS took effect.

PSE continues to have a strong need for new generation resources despite the economic downturn because of expiring contracts and aging generation facilities that will soon require replacement. Solar is not a good generation choice locally because it doesn't well match seasonal load requirements. Anaerobic digestion such as that being developed by Farm Power is of much greater interest and suitability.

Energy efficiency initiatives are good not only because they are highly cost-effective but also because they generate many jobs quickly. The challenge for utilities, especially investor-owned for-profit ones like PSE, is that the financial returns come from generating and selling more power, not from selling less by promoting energy efficiency. "We need to talk about new policies" such as decoupling utility profits from higher use as the current regulatory structure requires. 23 states have some version of decoupling and "there are 33 ways to do it."

I asked Harris about her views on distributed generation and on the role of feed-in tariffs. Her facial expression upon hearing the words "feed-in tariffs" elicited some laughter from the audience. Turning to John McCoy, chair of the Washington State House Technology, Energy and Communication Committee, she asked: "Did you put him up to that question?" Also laughing, McCoy swore he didn't (which is true.) The exchange suggests that this has been the subject of some recent discussion in Olympia. In reply, Harris chose her words carefully, noting that distributed generation could "reduce a lot of issues on the grid" but that there remained reliability concerns. Citing the example of Germany, which used theirs to become one of the world's largest solar generating countries, she observed that feed-in tariffs are best viewed as an economic policy rather than as part of an energy policy. Recent adjustments in Germany and in Spain show that feed-in tariffs can become economically burdensome to utilities and to governments unless carefully implemented; the principal value, done properly, can be stimulative to a nascent industry, creating companies and jobs.
Posted by Unknown at 11:17 PM