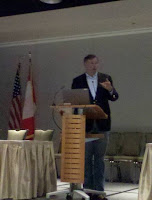 US Representative Jay Inslee (D-WA) gave the luncheon keynote address at today's Bioenergy Symposium, held at Seattle's Trade and Convention Center. His prepared remarks, and most of the audience questions concerned the future of climate and energy policy in the US Congress in the aftermath of last week's elections, which gave majority control of the House of Representatives to the GOP.

Inslee joked initially that House Republicans had a new plan to address global warming: they would change all measurements in Fahrenheit to now be in Centigrade, thereby lowering temperatures. "Problem solved!" It's funny, but also not funny because it is compatible with "vast ocean of ignorance" displayed by Inslee's "friends in the other party." He noted that all 20 GOP candidates for the Senate deny the reality of climate change, including "the Senator from Arizona" (John McCain) who stood with him when they jointly introduced cap-and-trade legislation, which McCain now repudiates. As a result the Congress as an institution is "willfully blind" to the threat of climate change, a threat, said Inslee that is existential in a way unlike anything humanity has ever before encountered.

The seriousness of this threat is not in serious doubt by anyone with expertise in the subject. Inlsee noted that today the American Geophysical Union announced that 700 scientists would work to counter the misinformation of so-called climate skeptics using an organized informational campaign. He "we need a thousand men and women in white lab coats... addressing what they know about science" surrounding the Capitol to get through to his Republican colleagues. Researchers and companies need to get more active in public forums of every kind to counter climate change denial. The new GOP majority "will approximate the McCarthy hearings" in attacking climate change and those who speak scientific truth.

Also concerning is the GOP leadership's announced plan immediately to cut $100B of federal spending, which will almost certainly include energy R&D. This spending, however, is the "seed corn" that the public sector must invest to create the conditions that stimulate private investment. Government has always played an essential role in launching new industries, and our spending is one fifth "at best... at best" of what China is now doing to dominate the new energy economy. Inslee would like to see funding for the other 5 of Energy Secretary Steven Chu's planned 8 Clean Energy Hubs, including for one in the Pacific Northwest, but that funding is now very unlikely.

On a more positive note, Inslee thought that a bipartisan Renewable Portfolio Standard (RPS) might be achievable. However, when a member of the audience asked who in the GOP would support it, Inslee smiled, saying only "I'll talk to everybody" and promising to be more specific "off-line." He left the venue immediately after speaking, unfortunately, so the off-line details are apparently for another day.


Tomorrow and Wednesday will be the Future Energy Conference. I am part of the staff helping manage the event, but hope to attend some of the sessions too. I hope to see you there!
Posted by Unknown at 11:31 PM