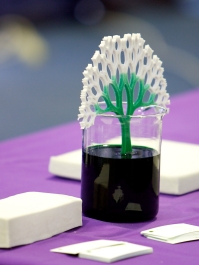 ~ It was a great afternoon at the Seattle Center Exhibit Hall for the culmination of the University of Washington's Environmental Innovation Challenge. 17 teams made it to the finals and were scored on their 1-page executive summary, a 2-minute stand-up pitch, the caliber of their exhibit hall demo, and the judges' assessment of the potential impact of their idea.

The first prize winner was Voltaic, maker of modular components for electric vehicle drivetrains, including motor, transmission, braking, and power electronics. The team installed their prototype in a Honda Accord donated from Burien Honda and showed how they could both power the car and brake it by running the motors backwards. Regrettably, we couldn't take it for a real test drive, but I'd sure like to see it out on the track to see what it can really do. 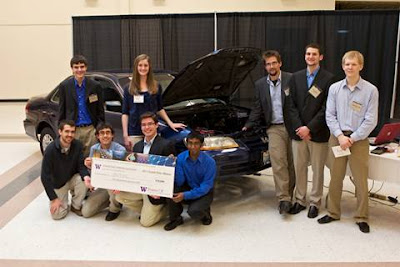 Runner-up PotaVida has prototyped a solar disinfection indicator, which can be used in the developing world to indicate when UV light has sufficiently sterilized water so it is safe to drink. They earlier won a $40,000 design challenge using their technology, and seek to reduce the leading cause of death globally amongst children under 5: dehydration from water-borne disease and infection resulting from drinking dirty water.

Three companies won honorable mentions: BioTek, developer of hand-held analytical devices for the algal biofuel industry; C6 Systems, which plans to turn slash piles into cash piles by turning forestry waste into biochar in situ; and Pterofin, creator of an ingenious new type of wind-power generator. (Only Pterofin has a web site that I could find, but it is a stub which says they are in "stealth mode.")

These five were also my top picks from the teams (although I might have changed up the order a bit.) Also having some future commercial potential were WSU startup CycleBox, who plans "convenient, automated enclosed bicycle parking" that protects from theft, vandalism and weather; Hybrid Solar, which intends to sell combined heat and power solutions for homes/small commercial; and Let's Build Airships, a prospective builder of heavy lift, solar-powered blimps.

Most of the teams need quite a bit more work on their product definition and business plans, especially around customer and market definition, go-to-market approach, and basic revenue model. UW Professor Emer Dooley noted that the challenge has been deliberately designed to focus on demonstrating prototypes, in large measure to attract talented engineering and science students who might otherwise avoid something more like a traditional "business plan competition." By pairing up with students from other schools and departments (e.g. finance or business types) they may get some horizons expanded. Said Dooley: "There isn't an entrepreneur on any of these teams." Not yet, perhaps, but the challenge just may give a few the bug. Several with whom I spoke were keen to enter the upcoming Foster School business plan competition or the Cleantech Open, or both.

The event was very well done on every count, and the venue was a big improvement over last year. Good food and drink, many good friends and colleagues, and a room full of excitement and enthusiasm. It was fantastic to have so many sponsors to help make this possible and support entrepreneurship locally, and amazing to have 96 other judges not only scoring, but providing feedback, advice and contacts to the teams. March has gone out like a lion, and I am sure we will hear from many of these teams again as they go on to further success.