~ The Difference One Letter Makes 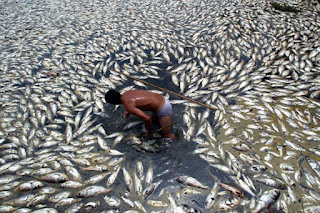 ~ In France, someone tricked by an April Fool's prank is called a poisson d'Avril, an April fish. (The term "fish" to mean a fool can be found also around the Texas Hold'em table.) Drop one letter 'S' however, and the result is poison d'Avril, April poison. Seems very different! In our Congress these days, however, perhaps instead too scarily similar.

Yesterday, there was a report, later denied, that the Obama administration had signalled to Congressional Democrats that they needed to acquiesce to GOP demands to neuter the EPA, in order to reach agreement on a spending bill to keep the government operating. April Fool us! At issue is the EPA's implementation of the Clean Air Act, stemming from the directive by the US Supreme Court that the EPA must regulate carbon dioxide and other greenhouse gases as pollutants. The lust by the GOP and fossil Democrats to condone and excuse carbon pollution has now metastasized into a broader assault on the EPA and a pitchforks-and-torches effort to gut the Act beyond just carbon regulation. (That the EPA was proposed and created by famed liberal bleeding heart Richard Nixon, and that he also signed the Clean Air Act, just goes to show how every GOP member of Congress is now politically farther to the right than Nixon. Considering how Ronald Reagan raised taxes—many times!—also shows how they are all farther to the right of him too. In what sense can any Republican now be considered "centrist"?)

The poisonous atmosphere in Congress prevents rational discussion or judicious deliberation of issues, or even any agreement to rely on science, fact, or evidence. It is an intellectual wilderness. A good environment is good for the economy, perhaps as much as $2 trillion, and the benefits of a not fouling our own nest may have even greater economic value, even as they improve our quality of life.

Attacking the EPA is just one front in the GOP's larger effort to insist on doing nothing to address climate change. Another is to attack the value of planning for a future after oil, and especially to denigrate the value of developing clean, green alternatives to our increasingly crippling fossil fuel dependency. The broader economy will benefit from robust environmental protection; it is the dirty incumbent polluters who externalize their costs on the rest of us that stand to lose. It's the usual suspects that oppose that which would benefit virtually everyone else. We should follow the money. Little wonder the public overwhelmingly trusts the EPA over Congress.

On climate change, climate science, and, right now in the battle over letting the EPA continue to do the job it has done so well since its bipartisan creation, our government is struggling to do the right thing, besotted as they are with easy cash from entrenched carbon interests. This cash is poisoning our policy deliberation as too many legislators are literally being bought off by incumbent interests that are inimical to the future of our economy, our environment, and our global competitiveness.

One of the many upshots of climate change is the loss of topsoil, and the reduction of arable land that can feed the world's growing population. Climate change is altering the hydrological cycle. Small changes can have dramatic effects, whether it is a few degrees in temperature, or one letter in a phrase. As our leaders play us for fools this April on everything from the economy to climate change, we must demand  that they do the right thing, not that for which they collect campaign contributions that are little more than bribes.

Otherwise we will get our just desserts, or, as unchecked climate change will deliver us, just deserts.
Posted by Unknown at 11:37 PM