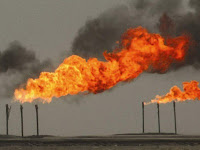 ~ It's been said metaphorically that we should eat our energy efficiency vegetables before indulging in renewable energy desserts. Vegetables are actually quite delicious. They are really good for you, which holds true in the metaphor as well. One of the tastiest energy efficiency steps we could take is to stop wasting natural gas through flaring:


GE today released a study, Flare Gas Reduction: Recent Global Trends and Policy Considerations, which estimates that 5 percent of the world's natural gas production is wasted by burning or "flaring" unused gas each year—an amount equivalent to 30 percent of consumption in the European Union and 23 percent in the United States. Gas flaring emits 400 million metric tons of CO2 annually, the same as 77 million automobiles, without producing useful heat or electricity. Worldwide, billions of cubic meters (bcm) of natural gas are wasted annually, typically as a by-product of oil extraction.

The technology to capture and use this gas exists today, and the economics make enough sense that funding the capital need is doable. It has become politically fashionable to assert that we have enormous supplies of natural gas, or even that the world is "awash" in it. Didn't we use to think that about oil once? Perhaps we should be prudent, rather than wasteful, from the outset.
Posted by Unknown at 11:29 PM