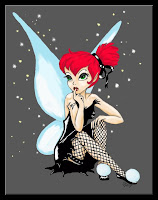 ~ Paul Krugman is getting a headache from the Wingnut Wurlitzer:


Two weeks ago, Republican staff at the Congressional Joint Economic Committee released a report, "Spend Less, Owe Less, Grow the Economy," that argued that slashing government spending and employment in the face of a deeply depressed economy would actually create jobs...

Here's the report's explanation of how layoffs would create jobs: "A smaller government work force increases the available supply of educated, skilled workers for private firms, thus lowering labor costs." Dropping the euphemisms, what this says is that by increasing unemployment, particularly of "educated, skilled workers" — in case you're wondering, that mainly means schoolteachers — we can drive down wages, which would encourage hiring.

The other problem, the Confidence Fairy of which Krugman writes, is the notion that more austerity will lead to increased "confidence" by businesses, who will then start using their record cash reserves to invest in plants, equipment, and new hiring. Except that this is demonstrably untrue, both from history and from reason.

Krugman may be getting a headache, but it will take more than aspirin to alleviate the pain the GOP prescription will visit on the vast majority of Americans.
Posted by Unknown at 11:11 PM