Last week was too easy, so more of a challenge this time. It looks like something out of Myst. Somewhere in Seattle... Where is this?

Last week's photo was of the top superstructure on what was, until recently, known as Qwest Field, home of the Seattle Seahawks and the hottest ticket in town, the Seattle Sounders. 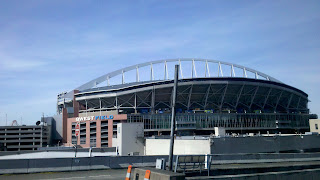 Now that Qwest has been swallowed by CenturyTel, it is unclear what the name of the stadium is or will be. Will it remain Qwest Field? Be renamed the rather unmelifluous CentruyTel Field? I suppose there's little chance the corporate bagmen would consent to calling it something, I dunno, fan friendly? Like, Seahawks Stadium or Sounders Stadium? Or even the ambi-sport Seattle Field?

Who knows what the new name will be, but smart money would have to be money talking and a drab and corporate failure of imagination and vision. Too bad. Meanwhile, the Puget Sound Business Journal is polling for the new name. Vote here.
Posted by Unknown at 10:42 PM