How I Learned to Stopped Worrying
and Love High Gas Prices 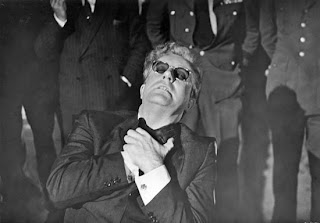 ~ Big Oil and its paid Congressional sycophants have a seemingly endless supply of rationalizations for every industry excess. Did you know high gas prices are good for you? Me neither, but the American Petroleum Institute (API) has helpfully explained why we should all be more grateful.

It seems that all those gushing profits are swelling the pension funds of school employees and state government workers in 4 Midwestern states:


...returns on oil and natural gas assets from 2005 to 2009 averaged 46.5 percent, compared to 13 percent for all other assets, according to the analysis by Sonecon, an economic advisory firm. That means that each dollar the funds invested in oil and gas stocks in 2005 was worth $1.47 on average, while every dollar invested in the rest of the portfolio grew to just $1.13.

Well, that's a relief. My richer pension fund will pay out more so I can afford to fill my tank... right? Sadly, no.


First of all, pensions pay out to recipients based on such things as their former base salary and years of service, not some percentage of their actual gains or income generated. Second, even if they did, it wouldn't be enough. While the returns may approach 50%, the price of gas has more than doubled; my pension won't cover my bigger bill. Finally, who has a pension these days? Certainly not many people who have to drive themselves to work. (And never mind that many of the same people defending Big Oil also think the state workers above shouldn't even have pensions at all.)

They thrust this pretzel logic on us now because Big Oil is in the midst of announcing Big Profits, and are desperate to defend the otherwise indefensible--billions of dollars in taxpayer subsidies in a time of growing budget, debt, and deficit hysteria. The API won't let anyone be confused about their clout:


Kyle Isakower, API’s vice president of regulatory and economic policy, said the group would “educate Americans about the study’s findings” and provide the information to policy makers... “As proposals are raised that would hurt the economic viability of the oil and gas industry in the United States, it is important for policy makers to understand who it is that gets hurt,” Isakower said.

That's right, back off on attacking our subsidies and no one gets hurt. Nice little pension you got there; it would be a shame if something happened to it.

There is a deeper and more fundamental flaw in the defense of these huge profits, however. If high prices producing high profits to the benefit of shareholders is intrinsically good, and higher prices and higher profits are better, and outweigh any negative impacts of the higher prices, then more is better. And why should such goodness be the province only of oil companies? By the same logic, all usury laws and interest rate limits should be eliminated, allowing banks, mortgage lenders, credit card issuers and others to raise their rates at will. Sure, those paying the rates may suffer a bit, but think of the boon to shareholders and the surging vitality of the financial industry! Similarly, our tax dollars should subsidize the profits of food companies, medical providers, water utilities and others, and they should have the unfettered ability to charge anything they like, especially where (as is true in all of these instances) they provide an essential good or service and demand is relatively inelastic, i.e. isn't tightly coupled to changes in the price.

Sharply higher prices do eventually lead to some being no longer able to buy, but that may not be a problem for the seller. If prices go up 30% and that causes 20% of the buyers to go away, the remaining 80% will still, at the same rate, result in a revenue increase of 4% with profits as much or more. And that's more money to pay executive salaries, fund mills of mendacity like the API, and influence Congress.

It's a racket, and it's splendid if you're a racketeer. We should all love higher gas prices, and we would, without worry, if only we were all in on the racket.
Posted by Unknown at 11:01 PM