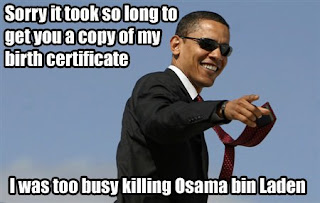 ~ Further details of what happened will be interesting, to say the least. Initial thoughts: the silence from Pakistani leadership is deafening; they don't look good. He was living comfortably in a villa in one of their larger cities, and apparently they were not involved in the operation, and perhaps likely didn't even know of it in advance. Obama gave them cover in his announcement, but there's doubtless some really pointed chatter in private.

Faux News is absolutely squirming delivering this news. If a Republican were president, there would be endless praising of leadership. With Obama, rather muted, and of course, a try at giving credit to Shrub. Such a bitter pill for them.

So the US has his body. What on Earth are going to do with it? Whatever they decide, expect withering criticism of Obama for it.
Posted by Unknown at 11:53 PM