~ There's a lot of political horsepuckey stinking up discussions about energy nowadays. Rhetorical hyperbole is the norm for the election season, now fully underway, but energy is a critical subject. Much of it must be called for what it is—lies.

For example, over-heated indignation in some quarters of Congress asserts that US oil production is in decline, and it's—you know!—all President Obama's fault because he is "blocking" domestic oil drilling. And if Obama would just get the gummint out of the way, both more oil and its wondrous benefits to the economy, the American Way, etc. would flow forth. Good rabble-stirring rhetoric, but reality—not. 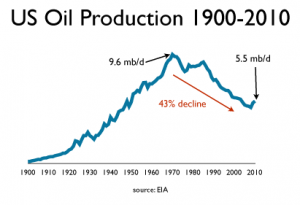 US domestic oil production is indeed declining. It has been since 1970 when we reached Hubbert's Peak domestically. It's been almost all downhill since, exactly as predicted, and the result to be expected any time one systematically depletes a finite resource.

The overall 40-year-and-counting decline in US oil production cannot, obviously, be blamed on Obama. Nor can it be blamed on any president of either political party; it is geology and technology, not policy or politics that is responsible for the decline in domestic oil drilling and production.

Furthermore, while it may prove just a temporary perturbation, there is an obvious uptick on the chart above, and, in fact, domestic oil output in 2010 was the highest since 2003. Despite the moratorium in the Gulf of Mexico. Despite real concern and prudent caution about fracking, oil shale, tar sands and the rest of the "unconventional" oil production methods. 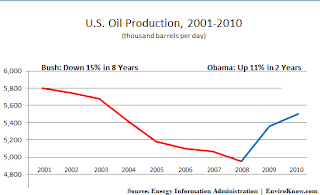 Notwithstanding Obama's fairly small and short-lived nods towards worker safety and environmental safeguards in the oil patch, the fact is that oil production has increased under Obama.

Even Halliburton says so:

Obama talks about green energy, but is fundamentally pro-oil to a greater extent than his environmentalist friends find comfortable and his political detractors admit. He has called for expanded domestic oil production, but he continues to receive criticism for his supposedly "long ... record of locking-up America’s energy resources."
Posted by Unknown at 10:10 PM