~ Today is Memorial Day, when we remember with gratitude those who serve and those who have served, and sacrificed, for our country and for our liberty. Even as we remember the honor of the past, and thank those serving in the present, we fail our soldiers should we forget to secure their future. So many are placed in harm's way because of our debilitating dependence on fossil fuels. Unlike our craven politicians who pander to their oily bagmen, our military leadership knows the vulnerability and is taking action. Below is a slightly edited repost on the subject from 11/27/09. 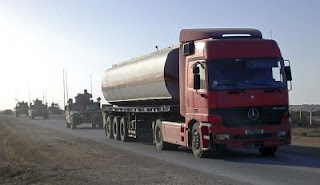 Renewable energy has many benefits, but usually saving lives isn't one of them. However, it has the potential to do just that for the United States military.

Marine Corps Major General Richard Zilmer is based in Fallujah, Iraq, and has responsibility for dangerous Anbar province. He and his 30,000 troops generate electricity from diesel generators for cooking, refrigeration, communications, charging batteries and especially for cooling their tents in the 135-degree weather.

The fuel for these generators comes over land in long, snaking convoys of slow-moving and vulnerable tanker trucks. These convoys have been a repeated target of attack and, even with considerable security measures, are extremely vulnerable and very risky for all personnel involved. In an urgent 2006 memo to commanders at the Pentagon, Zilmer warned that US forces "will remain unnecessarily exposed" and will "continue to accrue preventable ... serious and grave casualties" unless they were provided with "a self-sustainable energy solution."

The problem is not new, and dates back at least to the US military effort to drive Iraq out of Kuwait in 1990. A 2004 study by the Rocky Mountain Institute outlined how, "before the recent rise in oil prices, the U.S. Army spent some $200 million annually on fuel and paid personnel an estimated $3.2 billion to transport it. The Defense Energy Support Center reports that in 2005, the U.S. military spent around $8 billion on some 128 million barrels of fuel; in 2004, it spent $7 billion on 145 million barrels." The cost of fuel is higher now than in 2004, and will almost certainly continue to climb.

In response, the US Army's Rapid Equipping Force (REF) may soon solicit proposals from companies to supplement front line diesel generators with renewable-energy power stations using a mix of solar and wind power. Such an approach continues a growing interest in alternative energy sources by the Pentagon.

Notes Zilmer: "Continued casualty accumulation exhibits potential to jeopardize mission success." Renewable energy could provide electrical power without an expensive and dangerous supply chain and the mortal risk to soldiers and civilians it entails. Adds Al Shaffer, the executive director of the Pentagon's Energy Security Task Force about efficiency from renewable energy: "We save money; we simplify our logistics supply line, which makes us a more effective fighting force; we free ourselves from dependence on oil controlled by our adversaries; and above all we save lives." Weaning the military, however partially, from oil dependence also has strategic value long term.
Posted by Unknown at 6:39 PM