The Two Faces of Energy 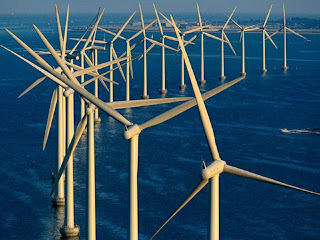 ~ Even as Congress pushes for more drilling more places with fewer restrictions and less oversight, offshore wind is having its sails trimmed.

The Bureau of Ocean Energy Management, Regulation and Enforcement (BOEMRE) has announced that it is reducing the area under consideration for future commercial wind energy leasing on the Outer Continental Shelf (OCS) offshore Massachusetts. This reduction is in response to multiple comments received in response to a Request for Interest (RFI) issued on December 29, 2010.

“We have heard significant concerns from the people of Massachusetts and we have acted on those concerns,” said BOEMRE Director Michael R. Bromwich. “BOEMRE is committed to continuing the public engagement process as we look to identify the potential areas for offshore energy development in the federal waters south of Massachusetts.”

In response to the RFI, BOEMRE received nearly 250 comments, including several from the Massachusetts commercial fishing community, the Governor’s office, and the congressional delegation, which argued for the reduction of the area under consideration.

The public, embracing the usual amnesia, now strongly favors increased offshore oil drilling, even though a majority doubt the federal government can prevent another disaster like the Macondo Deepwater Horizon, almost all think the Gulf of Mexico has not recovered and more than a third think it never will.
Posted by Unknown at 11:48 PM