Too Much Wind Power

What If We Had More Than We Could Use? ~ What indeed?
Our overly damp spring weather has provided an abundance of hydropower. There's so much that the creaky and antiquated electrical grid cannot take all the power wind turbines are now poised to generate. So the Bonneville Power Administration (BPA) which manages the grid, is shutting down wind turbines. If the turbines don't operate, they don't produce the power that in turn generates the income that pays for their financing.

Thus, wind is made less feasible because of a surfeit of hydro.


The long term solution is to update our grid, especially so excess power can be transmitted to where there is need. This would be especially valuable where it could be sent places that would otherwise be served by coal-fired generation, and so reduce the carbon emissions. Or it could be sent to replace natural gas-fired generation, with a similar, if reduced impact. 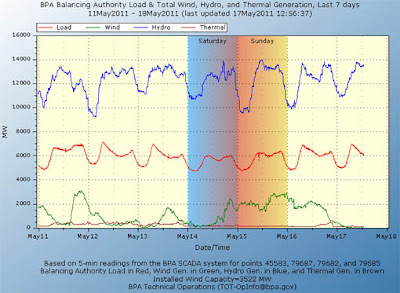 In the short term, however, we can bask in the fact, however temporary, that electricity in the Pacific Northwest is currently 100% from renewable sources.
Posted by Unknown at 11:54 PM