An easier one again (perhaps)... Where in Seattle is this? 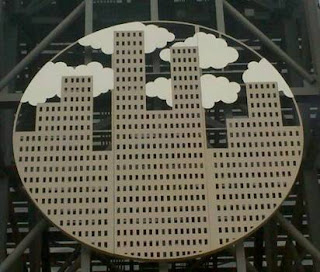 Last week's picture shows one of the two whimsical statues in the small plaza in front of the Starbucks at 3rd and Madison. 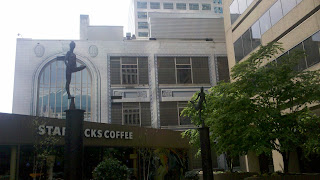 The mural on the building behind is quite fanciful, turning a drab slab of a wall into something auggesting architectural ornament. The full mural is quite interesting, and much of it faces the alley running parallel between 3rd and 2nd, but you really have to go see for yourself because there's no angle that allows photography to capture it.

This Starbucks has an antiquated dearth of power outlets for laptops and other devices, so it's lame as an office-on-the-fly. However, as a result, there's usually seats if you actually want to drink (their) coffee. Tully's is better, or any number of other places that aren't owned by a sh*t who sold out our hoops team to those carpetbaggers from Oklahoma City.
Posted by Unknown at 11:03 PM