What's Happening and Why?

~ UW Atmospheric Scientist Cliff Mass was at the Carbon Pricing Conference this past Saturday, connecting the increasing concentrations of atmospheric carbon to climate change and its effects. With but the briefest nod to the minuscule sliver with doubts, Mass stated what nearly all credible atmospheric scientists now accept: climate change is real and is at least partially due to anthropogenic causes. While the models are "very good, but not perfect," scientists are "confident that there will be warming, although the magnitude is uncertain."

Also uncertain is the variation of the warming, which will not happen uniformly. Local variation could be great. Worst likely will be in the Arctic and the "western [part of the] oceans" says Mass, while the eastern Pacific will be one of the last places to warm. Because we are "downstream" of those areas here in Washington State, we will likely see less change in the near-term. In fact, our area is one of the very few that is cooler over the past 10 years. Nonetheless, higher temperatures will reach us too, and later in this century it looks rather alarming: 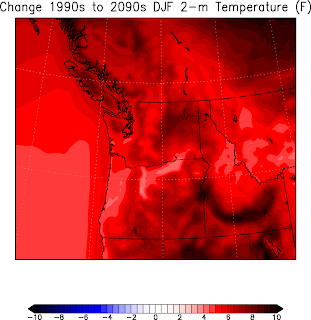 Most of this increase will occur decades from now for a second reason: not just the temperature is increasing, but so too is its rate of increase. Climate change is happening and it's getting worse, faster. What changes we can observe now (e.g. Arctic ice melting) are accelerating, and faster change will become more and more evident as years pass.

Mass also emphasized a critical point that those of us advocating for action on climate change would do well to bear in mind: exaggeration is counter-productive. "That's where we get into trouble." Reality that falls short of breathless predictions leads to skepticism, and that can lead to cynicism, and the message will not be heard. While I and many others believe (and some eloquently state) that the seeming increase in extreme weather events (tornadoes, floods, droughts, etc.) is consistent with the predictions of climate change models, a causal link cannot readily be made to individual events.

There are many other reasons beyond climate change to price carbon; in coming days I hope to post what some of the other speakers at the conference had to say.

As an aside, I'm very annoyed at my local NPR station, where I have been a regular listener for decades. KUOW fired Cliff Mass from their regular Friday programming, apparently for speaking on subjects other than those they wanted. Really. Mass writes on his blog:

PS: My next blog will include some observations about the nature of local public radio and its relationship with its listeners. I will suggest that there are serious issues well beyond my situation and that the large response reflects some deep-seated concerns of KUOW listeners.

PSS: Some station management of KUOW have started a misinformation campaign, putting information on Facebook and other web sites that are demonstrably false. I will describe this in my next blog. Coverups and misinformation campaigns frequently get people and organizations into worse trouble than the initial mistake. I find it extraordinary that a professional communications organization is doing such a bad job in handling this situation.

My earlier posts about the Carbon Pricing Conference: agenda and speakers and comedy.
Posted by Unknown at 11:02 PM