The Costs of More or Less Energy 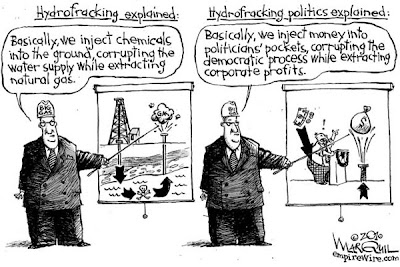 ~ Higher energy prices typically lead to calls for increased supply which should, in classical economic thinking, bring prices down (all else being equal, which it rarely is.) But there can be other costs to consider before blindly increasing supplies by any means. In France, they are poised to ban hydraulic fracturing (fracking) regardless of the potential to add energy supplies because the environmental costs are too great. The ban would reverse its earlier permission of the practice, which had been given so hastily that there wasn't even opportunity for public input.

France's Minister of the Environment Nathalie Kosciusko-Morizet expressed regret over fracking permits given to some of France's petrochemical giants:


I’m against hydraulic fracturing. We have seen the results in the U.S. There are risks for the water tables and these are risks we don’t want to take... It was an error [to issue the permits]. These never should have been granted. An environmental evaluation should have been done before giving out the permits and not after. [Emphasis added]

Energy is much more expensive in Europe. Gasoline costs about twice that in the US, so cars are smaller and energy efficient thinking is applied broadly. Increasing natural gas supplies through fracking would theoretically reduce its cost, alleviating pricing pressure on other energy sources as well. However, lower energy prices are not a goal so important that all other objectives become subordinate and dispensible.

Much as many in the United States recoil at the idea of learning from other countries (especially France!) the example set here is a good one:
If the conservatives that run the French government can do this, so can conservatives anywhere, including in the US. But perhaps those in the US caterwauling about fracking or offshore drilling aren't conservatives so much as radicals, or well-funded frontmen. Shill, baby, shill.
Posted by Unknown at 11:48 PM