The Decline of Liquid Fuels

The situation with liquid fuels is getting quite serious. Only crackpots deny that there is a finite amount of oil in the Earth, and both our demand for it and our extraction rate of it have gone almost entirely upward for a century. We will run out, and, while many dismiss this as some event of the distant future, the negative consequences are coming much, much sooner. And they are very negative indeed.

Our government is generally loathe to tell us bad news, preferring a sunny optimism bordering on Panglossian delusion. Yet an official of our Energy Information Agency at an EIA conference can present things like this: 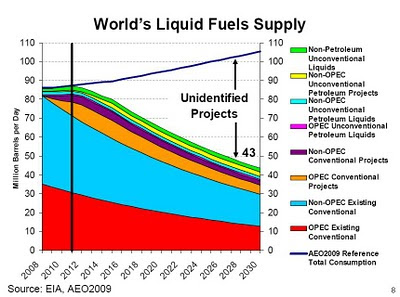 "Unidentified Projects"? Talk about unknown unknowns. It's also worth noting that the fattest swaths of this chart, our preponderant supply sources, are already in steep decline.

The easy oil is gone. Even the oil patch admits it when they caterwaul about deepwater drilling. Lift all restraints—NOW!—or we will all face insufficient supply and dangerous foreign source dependence. And what will happen once we have exhausted the Gulf of Mexico? Even if we drilled all over the Arctic National Wildlife Reserve, and all other off-limits locations in the US, we would have, at best, another five year's supply. Great while it lasts I suppose, but then what? Unidentified projects? How many of those can we expect to find? Answer: 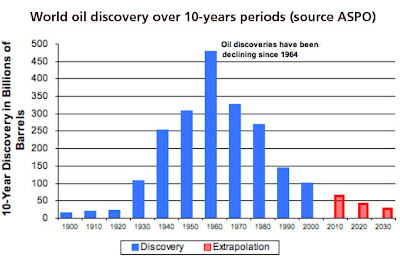 Our demand continues to increase even as we run out of new sources of supply. Meanwhile we must increase production of our existing sources even as they become depleted. Peak oil has already occurred in many countries: 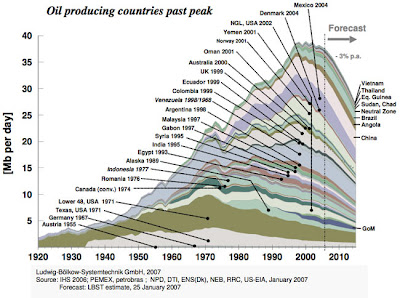 This is what peak oil looks like. There's still oil, but there is less of it, we aren't finding it as easily or in as great quantities anymore, it is harder to get at (deepwater) harder to turn into usable fuels (shales, tar sands) and more costly in general to produce. Many countries have peaked already. More will follow, and all eventually must. But long before they all do we will still be on the slippery and steepening slope down from Hubbard's Peak. The overall result? Much higher costs, and some severely negative consequences.

Must we wait for this very foreseeable crisis? Or can we get on with creating the new energy economy now?
Posted by Unknown at 10:49 PM