~ Small business is right to worry. While mainstream economists look at their econometrics and declare that the Great Recession is over, most small businesses have seen scant signs of an upturn.

The usual Randite suspects continue trying to pin blame on the Obama Administration. The criticisms include supposedly onerous taxation (even though taxes have been cut) and burdensome regulation (alleged despite a paucity of specifics) but most tendentious are the vague allegations about impaired "business confidence." It's really just shorthand for the other two: business will lack confidence and so hold back the economy unless assured by solid promises of still lower taxes and yet milder regulation.

There's a confidence issue, for sure, but it's a con game orchestrated by discredited maestros, mendacious hacks, and political hatchetmen.

Once you get past those desperate to salvage their own tattered credibility, the propagandists and those with political axes to grind, and actually ask small businesses directly, the problem is simple enough: persistently poor customer demand. Sales are weak. 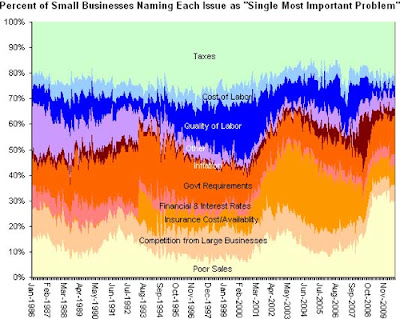 Poor sales are a clear problem in every recession, but have attained new heights of concern in this one. Several of the other categories are interesting.

Take labor for example. Both quality and cost of labor are minuscule concerns, as one might expect during periods of high unemployment. Yet again, however, this current period is remarkable for the extremity of the polled opinion compared to other downturns. Much bile is spewed and garments rent in Wisconsin and elsewhere over the supposed economic damage caused by labor unions and collective bargaining, yet business seems largely comfortable with the state of available labor.

Inflation? Interest rates? Who cares? Government requirements, the business bete noire of regulation, still registers, but hasn't changed hugely since Obama took office. An restored and appropriate seriousness about environmental issues by regulators probably explains the entire change. The Bush policies were so notoriously lax that it is hard to see how requirements could have done anything but swung back to a more typical level.

Taxes remain regularly a large concern, and one that has increased over the past 5 years despite the relentless drumbeat of ever more tax cuts. Of course there are many kinds of taxes, and it would be interesting to get more of a breakdown on just which taxes are most worrisome. I wouldn't be surprised to find that, with steady declines in federal taxes, and the corresponding cuts in federal monies to the states, the big tax fears are from state and local jurisdictions which are unable to engage in the same brazen budget chicanery that the feds employ. As the economy shrinks taxable activity, revenues decline and states scramble to redress yawning deficits despite increasingly sever cuts in services.

Some wonder how the economy's problems can be weak sales when large businesses are compiling a streak of record profits. There are several easy explanations: large businesses are frequently global in scope, and better take advantage of disparities in costs. They also see robust demand in many parts of the world; here in the US we are prone to thinking it is all about us, even when it's not. We had a Great Recession to be sure, as did some other countries, but many parts of the world barely paused in their growth and remain economically vigorous.

Record profits also result from the structural generosity of our government to big businesses. Large subsidies in the form of tax breaks can result in paying no taxes, even on profits of billions. Corporate profits as a percentage of national income have actually been rising for decades. For all the moaning about the high statutory corporate tax rate, actual payments by US companies have been declining for 30 years, one of several causes of our mounting federal deficit. No surprise really:


The corporate profit picture would seem to mirror what's been going on in the income distribution for individuals for the past few decades. The money is increasingly going to a select group at the very top of the economic food chain, who are able to reap the rewards of global growth, play the financial system astutely, and avoid taxes. You can spin this in a moderately positive way: these are very dynamic economic times, and the rewards are going to those companies and individuals who position themselves to take advantage of this dynamism. But there are an awful lot of negative ways you can spin it, too.

Small business succeeds by hard work, not squadrons of creative tax attorneys, armies of aggressive political lobbyists, and the logistical and financial clout to skip nimbly about the world to extract value and move on whenever the winds shift. Small business faces the full brunt of local or national economic problems; big business increasingly not only avoids it, but forces the rules to be rewritten in their favor.

Small business is still held in high regard, especially compared to many other of our institutions.

Small business is right to worry. They may have the confidence of most people, but policies are not being constructed in their favor.
Posted by Unknown at 11:59 PM