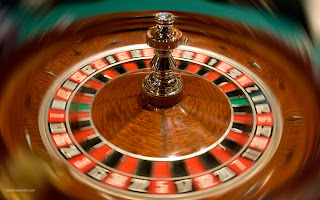 ~ It was probably 25 years ago that I first heard the stock markets described as the World's Largest Legal Casino. With the passage of time, this description has seemed less and less tongue-in-cheek and more like a sardonic condemnation uttered by an exhausted and disillusioned investor (of which I have known many.)

The latest indication of the growing grip of gambling mentality is an unintentionally revealing piece in the Atlantic Monthly: Does Anne Hathaway News Drive Berkshire Hathaway's Stock? Really. The article's subhed anticipates the knee-jerk derision such a thesis merits with a defensive "the idea may not be as far-fetched as you think." The article goes on, earnestly, noting a "correlation" between six dates where news about the actress immediately preceded upward movement in the stock price of Warren Buffett's firm.

Now it would be easy to dismiss this as simply the result of ambient ignorance and superficial attention span on the part of a large number of people who just happen to also style themselves as investors. A scrolling headline about prospects for a star role ("Hathaway's stock rising in 2011!") just might refer to the company, and gosh, who doesn't like the Oracle of Omaha's chances to add value? Buy!

Are these "investors" gambling? Maybe. But there's one group here that certainly is: the supposed professionals many institutions and individuals trust to wisely manage their assets.

To investigate whether there's anything to this Hathaway Effect, the author took action:


I called up John Bates, a former Cambridge computer scientist whose company Progress Software works with hedge funds and others to help them find new algorithmic strategies. I asked, "Is this at all possible?" And I was surprised that he answered, roughly, "Maybe?"

"We come across all sorts of strange things in our line of business, strange correlations," Bates told me. "And I've had a lot of interest in this for a long time because it's really often the secret source for certain hedge funds."

Companies are trying to "correlate everything against everything," he explained, and if they find something that they think will work time and again, they'll try it out.

Those wacky Wall Streeters! Why, they'll correlate anything!

There's a name for this, however, and it isn't "secret sauce source." Real statistical types might call this the (Inverse) Gambler's Fallacy. If unconnected events happen often enough in certain sequences, or more often than not, does that mean that they will continue to do so? Can past patterns predict future events? No; this is confusing correlation with causality. If analysis of such past patterns can unearth a connection where one actually influences or leads to the other, fine, we've learned something new about how the world works. Those who first found the insight can shrewdly profit thereby. But hyping a happenstance is just hope in finding someone with money who never learned logic or statistics. On Wall Street, this hucksterism is usually pitched as "momentum investing."

If I go to my local casino with my friend Red, and the roulette table spins 10 red numbers in a row, should I tell my friend not to go anywhere, and go all-in on his eponymous color? The next time Anne Hathaway gets some PR should I buy Berkshire Hathaway? Or a timeshare in the Berkshire Mountains? Hathaway Effect or gambling?

Do you feel lucky?


The stock market has become a casino in other ways too:
Additionally, as a passive investor in a public company or traded fund, you don't actually make any direct contribution to the business itself; you merely trade positions with another investor like yourself. Fundamentally, this isn't investing, the act of providing capital to build an enterprise to greater value. This kind of investing is speculating that someone else (typically company management) will build value (somehow) and raise the stock price, allowing sale of the position at a profit.

It is for these reasons that I don't commit what limited assets I have to the stock market anymore. I'd much rather put funds directly into capitalizing a business, particularly one where I am the entrepreneur or have an operational role myself and can drive the creation of value.

It's risk-taking for sure, but it isn't gambling.
Posted by Unknown at 11:04 PM