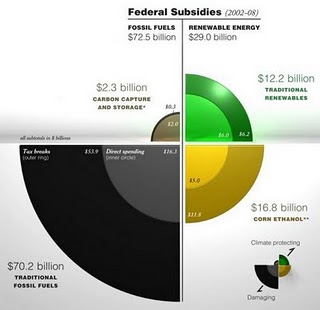 ~ For two years we've been hearing from many quarters about the urgent need to cut government spending to bring down the deficit. Some of the rationales may have merit, but what passes for debate on the subject is deeply unserious.

For proof, one need look no further than subsidies to oil and gas.


President Obama wants Congress to chop $3.6 billion in 2012 oil and gas tax breaks for a total of $46.2 billion over the next decade. Among Mr. Obama’s targets: a nearly century-old oil and gas industry tax deduction for the costs of preparing drill sites and a manufacturer's tax break granted the oil industry in 2004.

The number is significant, but still little more than one-tenth of the federal subsidies that oil and gas companies might receive over 10 years. Adjusted for inflation, they currently receive about $41 billion in annual subsidies annually. That amounts to more than half – 52 percent – of total benefits distributed to energy sectors by the federal government.

Using similar analysis, annual subsidies for coal amount to $8B, for nuclear $9B, and for ethanol $6B. Renewable energy reaps $6B, mostly to wind. In the State of the Union, Obama called for eliminating oil and gas subsidies entirely, noting to laughter that those companies are "doing just fine on their own." The oil patch of course swung briskly to battle stations, and Congress, lead by the GOP, voted it down decisively.

This particular form of corporate welfare is going to continue even as we hear endlessly about the urgent need to "sacrifice" for the sake of "putting our fiscal house in order." But what will be sacrificed? Or should we ask rather, "who?" Almost no one is talking about the big parts of the budget: Social Security, Medicare, Defense, and Debt Service (Interest). No real deficit reduction is possible without looking seriously, and with sharp instruments, at these four areas. The rest of the budget put together will not provide the savings even if utterly eliminated.

The inescapable conclusion is that true agenda of those hyperventilating about the dangers of deficit spending aren't serious about the deficit. They have another agenda: killing programs for ideological reasons. So who must make sacrifices, and who is spared? No surprises here. Is this the change we want?
Posted by Unknown at 11:20 PM