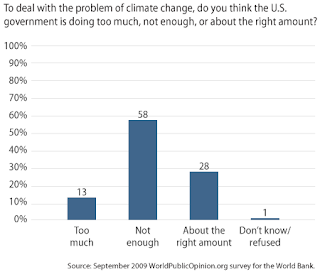 The disinformation campaign and faux controversy about climate change has shifted public opinion. The general public has become less certain about the reality of climate change over the past year and more inclined to believe that a real scientific controversy exists. However, a majority of businesses are acting as if the controversy is settled according to accounting firm Ernst & Young:
The survey of 300 businesses in the US, China and 14 other countries included a cross-section of businesses, including airlines, banks, and general industry. All had at least $1B in revenues. Noted Doug Johnston, Ernst & Young's U.K. director of climate change and sustainability:


With all the uncertainty following Copenhagen, many business commentators were expecting the momentum in climate change investments to slow. Our research has shown something very different.

It's quite surprising that business is leading the way in addressing a serious environmental problem on which the public shows increasing confusion and ambivalence. It is tempting to think that business is perhaps starting to see the costs and benefits more clearly; however, it may be more about keeping customers happy than about the operational bottom line: about 90% of the surveyed firms reported that their actions were due to customer demand.