Carbon Pricing in BC 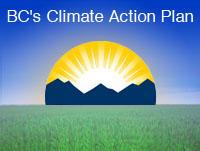 ~ I've been in Vancouver BC all day, and people here confirm what I heard at the Carbon Pricing Conference a few weeks ago: BC put a price on carbon a few years ago and it's working—for everyone.

Not only that, but none of the dire predictions of economic catastrophe have come to pass, and there is no longer political opposition to having such a tax. There is a simple and straightforward object lesson here about the hysterical voices in the US Congress shrilling shrieking shibboleths of doom and devastation: they're wrong.

At the conference, Jeremy Hewitt with the BC Climate Action Secretariat of the provincial Ministry of the Environment explained the history and implementation of North America's first true carbon tax in BC. The enabling legislation was introduced and passed by the current government, one he describes (accurately) as ideologically "center-right." A key provision of the tax was that it be revenue-neutral—all revenues raised by the tax are offset by corresponding cuts in other taxes. Another key provision was to provide rebates (tax credits) to lower-income populations on whom the carbon tax might otherwise fall too heavily.

The tax applies to virtually all liquid fuels of every kind at a rate of about 17 cents per gallon, based on the carbon content per tonne. The revenues were used to reduce both corporate and personal income taxes, giving BC the lowest corporate tax rates in the G7. Personal income tax rates (up to $119,000 of income) are also the lowest in the G7. Little wonder that the policy was broadly supported by the business community, (although, in a manner like President Nixon creating the EPA, it probably helped that a business-friendly administration was doing it.)

Opposition in 2008 came from the political left: the NDP argued that geographic and demographic disparities would cause some populations (lower-income, rural) to be hurt. The election of 2009 was largely fought on the issue of the carbon tax, and the existing government was re-elected. The feared disparities never materialized and evidence shows that the policy is working well. What contention remains surrounds the question of whether to maintain revenue-neutrality or use some of the revenues to further boost BC's already impressive support for the development of cleantech and renewable energy.

The carbon tax is part of a broader Climate Action Plan that also includes a complementary cap-and-trade plan (no "double regulation") in 2012 and Renewable Portfolio Standard (RPS) of 100% by 2016.

These and other steps to meaningfully address our environmental and economic future were undertaken by a conservative government. Such policies are thoroughly consistent with conservative principles, because they preserve what we cherish about our lives and communities, they don't raise taxes, and they incentivize business in ways that add to economic vitality, while discouraging those that impose (externalized) costs on third parties.

Today's rigidly hostile GOP, many of whom consider the Earth and its resources divinely placed for humanity's exploitation and benefit, would also do well to embrace something else that even more clearly distinguishes us as a species:

Human beings, who are almost unique in having the ability to learn from the experience of others, are also remarkable for their apparent disinclination to do so.

What has been done in BC is as clear an example as could be wanted of how to solve the climate problem and of how it can be done by conservatives. It is also a starkly clear indication of how opposition in the US is not conservative, but radical; not principled, but corrupted by the power and money of incumbent special interests.
Posted by Unknown at 5:22 PM