Same Old Song Not Even Worth a Dance

~ Congressman Jay Inslee will announce a run for Governor in Washington, and, on cue, the usual suspects strike their tuneless and discordant notes.

One of the first with his kazoo is Todd Myers of the Washington Policy Center with a vacuous bit of fluff astonishing for its intellectual laziness.

Myers starts by lifting one paragraph out of Inslee's book (Apollo's Fire, which he doesn't bother to cite):


Those ‘nattering nabobs of negativism’ will constantly point out irrelevant facts about how expensive alternatives are compared to fossil fuels, how inconvenient they are, and how undeveloped they are. Those unfortunate victims of the tyranny of the present cannot envision the inevitable growth in efficiency, declining costs, and ever increasing accessibility of clean and renewable energy.”

Myers then claims to "understand" the point, and proceeds to write in a way that shows he doesn't get it at all. Like all good wingnuts with an ideological axe to grind he starts out with a broad, unreferenced fiction that he labels as "fact", claiming that "solar panels, and other green energy technologies, are extremely expensive, unusable and undeveloped." The facts, for anyone with a few minutes to spend looking, are that renewable energy technologies are increasingly used and well-developed. Furthermore, the expense continues to decline. Land-based wind power is now very close to the cost of coal generation, and solar modules are on the verge of breaking the $1 per watt threshold. Compare to nuclear at $10-12 per watt.


He speciously argues that


if you don’t make decisions based on whether a technology is affordable, usable and developed, just how would one make a decision?

This deliberately confuses what decisions are being made, and why. Inslee argues for government support in cultivating a green economy to advance several inter-related objectives: increasing energy security and independence, reducing foreign oil imports, combating climate change, creating jobs, and enhancing our economic competitiveness with the rest of the world. The decisions that need making for these reasons are not ones that hinge on determinations of affordability, or technological readiness, but whether we are determined to remain an economic and political power.

By Myers' tortured logic, government's only role should be to support incumbent industries like coal, oil and gas, because they are "affordable" (if you don't count the externalized costs), "usable" (we're using them now!) and "developed" (thanks in no small part to billions of taxpayer subsidies.) This is clearly what he sees as "convenient" compared to the renewable technologies that evidently aggravate him so. Imagine if we had used Myers' criteria for space exploration, or to develop the Internet, or our various engines of war? Or the early years of nuclear power. We'd never have done any of these, or many other things if we had first required that they be already affordable, developed, convenient, etc.

Making a nod to the possibility that "solar panels and other technologies" can "become more efficient over time" he immediately dismisses the prospect with the one-word paragraph: "Perhaps." Evidently, Myers is unfamiliar with the arc of technology advancement in general, where greater efficiency and capability at lower cost is not a hazy possibility, but the norm. This has been true of everything from cars to communications, from agriculture to semiconductors. The technology Myers has employed to render this sad little screed has been brought to him by exactly the kind of technological progress and government support he would now withhold from the renewable energy industry.

The effect would be to retard progress on renewable energy, but only in the United States. Unlike in those other, earlier industries, the US would not ride the potent combination of entrepreneurial talent and government support to a position of world leadership in a multi-billion dollar industry. It would not create millions of jobs or export products across the globe. Instead, we would come to rely on others to provide us the energy and technology critical to our very survival, perpetuating the same dangerous state of affairs in which we currently find ourselves. 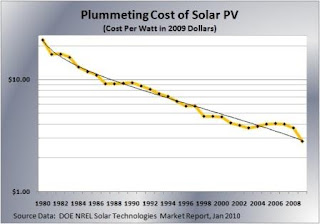 It is particularly clueless to question, as he does, whether solar power will ever become viable, when the relentless improvements in both efficiency and cost of photovoltaics have led many experts to conclude that these chips are following the same path as computational ones: Moore's Law applies to solar as well.

Myers then condescendingly savages a strawman:

You cannot escape the tyranny of the present by pretending that green technologies will develop while all else is held constant. That isn’t the way the world works.

Who's asking for everything else to be "held constant"? In truth, nothing will be, including the plummeting cost of renewable technologies and the inevitable further increases in the costs of fossil fuels. If any are calling for things to be held constant (gas prices, oil subsidies, hostility to developing alternatives) it is those, like the Washington Policy Center and its wingnut welfare recipients that defend "free market" solutions tilted in favor of industry incumbents.

The best comes at the end, and is virtually the only part of this pathetic piece of pap with which I agree:

That is a strategy that is certain to waste money and opportunities to make real environmental gains.

No doubt Myers intends this conclusion in the context of his evident animus. But read it again and ask yourself what is the politically favored technology to which it best applies?