Last week's picture shows detail of the bottom-most medallion of artwork on the north side of Qwest Field: 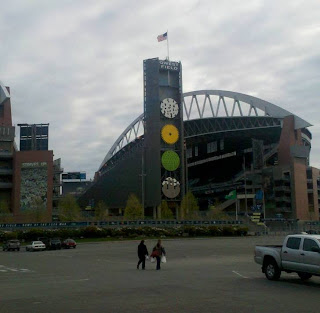 Bob Haozous’ installation on the stadium’s North Tower is assembled from four 24-foot-diameter painted steel discs. Although inspired by symbols that are part of his Warm Springs/Chiricahua Apache heritage, Haozous believes that the forms and colors of the artwork have universal meanings.

Specifically, the artwork is intended as a constant reminder of our deep connection to the earth. According to Haozous, the lowest disc, depicting a stylized cityscape, represents our contemporary, man-made world. The green disc above it symbolizes life and growth, but its human figures are flying away, suggesting the loss of man’s direct tie to nature, or in a more hopeful reading, a return to those ties. The third disc honors the sun, highlighting our dependence on the natural world and the redemptive powers of nature. The top disc is a collection of man-made clouds, meant to suggest the immensity of the natural environment.

Since CenturyLink (aka Centurytel) has bought out Qwest, the future name of this venue is, like our lovely June weather, gray. Still, a good place for some futbol: 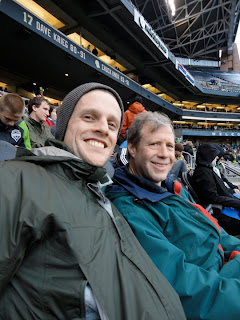