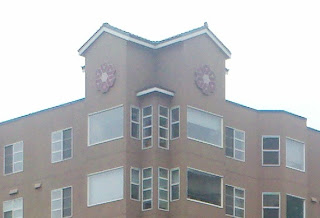 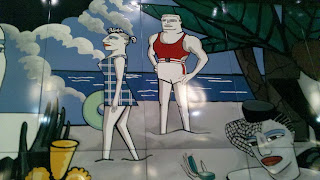 
wanted people traveling through the tunnel to know where they were below the city by looking at the architecture and design features of the station they were in.

How does this art evoke the Westlake area? Seems sketchy to me, but the explanation, for what it's worth:


On the walls of the station loading platform are three 10- by 35-foot murals-abstract reflections of the glamour and larger-than-life character of retail display windows in many stores above the station. Bringing the artists' interpretation of surface life into the tunnel, the murals are by Roger Shimomura, Fay Jones and Gene Gentry McMahon.

To produce the murals, the three artists painted smaller-scale working models. The models were reproduced with fired enamel on porcelain-coated steel in a process like that used to paint large kitchen appliances.