Who Pays to Maintain Our Roads? 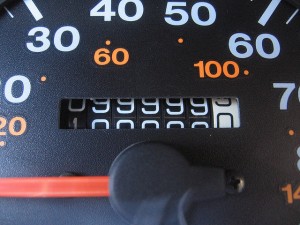 ~ Washington, like many other states, imposes a fee on owners of automobiles when they relicense their cars. The amount of the fee varies. It can be a flat fee, or it can depend on such things as the weight of the vehicle, its value, or its age. As a usage fee, however, none of these well correspond to the actual cost of suffering that vehicle's wear and tear on roads, the purpose to which those fees are generally put. The fee for operating the car does not correspond to the actual expense to repair and maintain that infrastructure.

The Washington State Transportation Committee may change that, however, as they prepare to recommend a scheme that calculates fees based on impacts:


Instead of relying on a gas tax, motorists may one day be charged by how many miles they drive.

Vehicles are becoming more fuel efficient or running entirely on electricity. Also, people are driving less, either due to the weak economy or because they're shifting to other travel modes, such as mass transit.

State officials project that as drivers use less fuel, gas tax revenues could fall by more than $5 billion between 2007 and 2023. This is a problem because in Washington, the state gas tax funds 76 percent of all transportation investments.

This is a good idea. People who mostly take public transit, but who own a car and drive it little, end up subsidizing those who use their cars more. All car users subsidize those who drive heavily.

We pay for gas by the gallon, cell phones by the minute, meat by the pound, taxis by the mile, carpet by the yard, and land by the acre. We pay for most things by how much of them we use. We should do the same for our roads and highways.

Cross-posted to the Fare-Free Northwest blog.
Posted by Unknown at 10:33 PM