How to Get Stuff Done

Making It As Simple As ABC 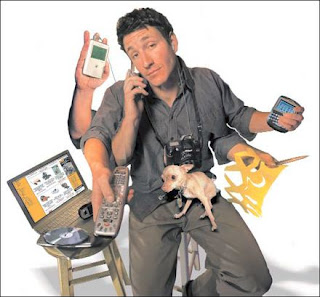 ~ I've multi-tasked for many years, even though I've heard it argued that true multi-tasking is impossible. We can really only do one thing at a time, and trying to do several things at once simply results in doing several things not very well, and perhaps completing none of them. It leads to all quantity and no quality.

The argument is both true and irrelevant.

It's true inasmuch as we can't really focus on more than one thing at a time. It's irrelevant because it's not only unnecessary, but detrimental, and it's not really what people mean by multi-taasking.

As with our eyes we can focus on one thing, but still pay some attention to those things in our peripheral vision. We won't be very successful trying to hit baseballs thrown at us by two pitchers simultaneously, but can probably move or duck if either is about to hit us in the head. We can walk and chew gum at the same time. Or talk on the phone and drive (although we shouldn't for the simple reason we can't truly focus on both.)

A different analogy is offered by computing. Until the advent of multiple-core processors, which truly work in parallel, computers didn't really multi-task either. But they nonetheless gave us the illusion of doing multiple tasks simultaneously, and what's instructive is how that happens. Without getting all wonky, it's the result of two things: (1) smart prioritization, and (2) highly-efficient switching between tasks. (And chances are, if you're complaining about your computer being slow, it's because one or both of those things is being done poorly.)

Smart prioritization is simply spending time on what matters. Your computer should give priority to whatever task is open and in front of you. As I type this, my computer is giving priority to the window in which I'm doing the composition. Other stuff, in the background, like updating a browser page, gets less attention, although it still gets some (I do want that task completed too.) The typical computer manages scores of tasks "simultaneously" by allocating time and resources to each, assigning each one a priority. There may be dozens of priority levels.

At human, rather than computer scale, we can't really manage too many priority levels, so we keep it simpler. I use three, which I call A, B and C priorities. The A tasks are the most important, and typically include the core of my work, whether writing a strategic plan for a client, or preparing for an investor pitch for my company. The B tasks are still important, but not as much, or not in the same way. They tend to be less immediate, and include things like writing web site content or researching competitors. The C tasks are less urgent, but still need to be done; examples include going to networking events, filing, and personal skill growth activities.

It's important to note that, while the A tasks are the most important, and are often mission-critical, the other categories still need to be done, at least eventually. Some time must be allocated to them too. I allocate 60% of my time to A, 30% to B, and the remaining 10% to C. This ensures that the big stuff gets most of my bandwidth, bu the little stuff still gets done.

Highly-efficient switching is making sure as little time as possible is lost when moving to a new task. With the computer, extra memory is great because you can keep multiple tasks in memory and switching to them is very fast. If they must be (re-)loaded from disk, it takes longer. And the more tasks there are going on the more switching may be needed.

Extending from silicon to our organic noggins has the same considerations. The more workspace I can devote to having my tasks in progress, the easier it is to switch between them. I don't need to clear my desk of one thing and pull out everything for another if I can swing over to my work table. Even without needing a lot of table surface, one can optimize the switching by keeping all the materials, supplies, references, etc. together where they can be quickly grabbed and used. File folders are a simple example of grouping, but many constructs work depending on the components of the work.

Finally, switching as little as possible is best. Finish each task, or get to a clean break point. Sequence tasks logically. Schedule stuff where the time, space, environment and limited interruptions enable completion, or at least significant progress against milestones.

Getting stuff done? It looks like multi-tasking, but it isn't. It's organization. It's effective scheduling, prioritization and switching. It is, in a word, execution.

Need help to gain mastery of your to-do list? Want to get more done? Contact me. Reduce your chaos and position for growth and success.
Posted by Unknown at 11:53 PM