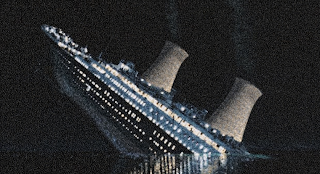 Click on the image to go to artist Chris Jordan's site to find that the image is composed of 67,000 photos of mushroom clouds.

67,000 tons of nuclear waste are stored in "temporary" pools today in the United States.
These waste pools must be cooled with hundreds of thousands of gallons of constantly circulating water, and many plants have inadequate or nonexistent backup cooling systems in case of power loss. In the U.S. and around the world, the waste pools are under-protected, over-filled, and vulnerable to earthquakes, storms, malfeasance, and human error. In 1997 the Brookhaven National Laboratory estimated that a calamity at just one of these waste pools in the U.S. could cause 138,000 American deaths (more than the number of Japanese who died in the 1945 bombing of Hiroshima), and contaminate 2,000 square miles of our land.

At the same time, at the ill-starred Fukushima reactor in Japan, 262 tons of similar waste is held in a similar pool, but with one big difference—daily earthquakes. If the pool ruptures and the coolant drains, it could release 85 times the radiation unleashed in the Chernobyl disaster.

Run The Numbers. My favorites include mosaics using bottle caps, $100 dollar bills, and this one: 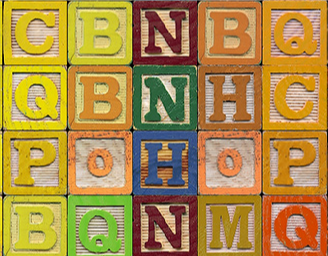