~ No question there are those who rely on handouts for their very survival. That said, there is equally no doubt that some at street corners and freeway off-ramps sporting "God bless" signs aren't begging, but are earning a living, or even supplementing one. 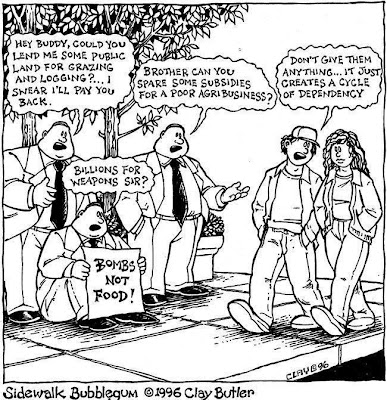 Legions of corporate persons engage in a similar exercise, infesting the off-ramps (and on-ramps) of Capitol Hill, making lofty (if vague and unprovable) claims about jobs as they buttonhole lawmakers in search of hand-outs. God bless!


With the sad throngs at the corners it can be hard to discern the shameless grifters from those needing a touch of temporary charity to get back on their feet. This is why I don't give any of them money, but direct my philanthropy to well-managed agencies where I know it will reach those truly in need.

Not so with the pinstripe and power-tie set. It is much easier here to identify the pathetic moochers from those working hard to stand on their own. To take the most obvious example: the fossil fuel industry enjoys permanent welfare of huge amounts, the removal of which would hardly affect either demand for their product or their development activities, much less their financial security. Meanwhile, the renewable energy industry relies on pitiful one or two-year extensions of the Production Tax Credit, needed for perhaps another 10 years, whereupon they almost certainly will be at grid parity and successful without assistance.

It has been fashionable for decades to decry the dependency that welfare ostensibly creates. However, it is clear that some recipients are more worthy than others. Some treat it as temporary and use that springboard to gain independence. Others just take and take as long as we are foolish enough to give.
Posted by Unknown at 11:27 PM