~ Big Oil is getting worried about their subsidies going away as part of the action to address the so-called fiscal cliff. Horrors! They might lose their taxpayer-funded welfare! Said a letter signed by a phalanx of 14 lobbies:


Any attempts to target the oil and gas industry for punitive treatment should be avoided as higher taxes could put the economic growth we’ve created at risk. 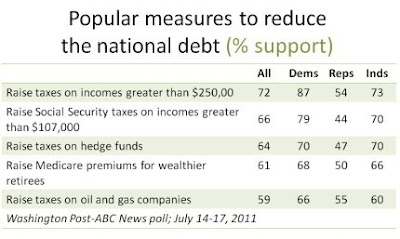 Yes, I suppose it "could" in the same way buying a lottery ticket "could" make me rich. Fat chance. But whether it is merely possible or not isn't really how we should decide this. Let's focus instead on likely outcomes. If I buy a lottery ticket I will make myself poorer by the cost of that ticket. And the potential "treatment"—reducing or eliminating taxpayer handouts to an insanely wealthy industry—is hardly "punitive." It will simply help out (a tiny bit) on our fiscal problems.

I'm old enough to remember Ronald Reagan inveighing against "welfare queens" and "strapping young bucks" who, he alleged, were receiving payments despite having ample resources of their own. No one then or since has characterized the removal of such handouts to such recipients (as if any significant numbers of such ever existed) as "punitive." And this isn't an historical artifact. I met a fellow just a couple of days ago and he was making the same complaint. He saw, he claimed, a woman in Costco buying steaks and fine wines, dressed "to the nines", sporting stiletto heels, wearing diamonds galore, and paying with food stamps. This fellow followed her out to her car, a late-model Mercedes, and finished the tirade with an abundance of indignation—how could we as a country survive if we give money to those who don't need it?

The contention that reducing or eliminating such corporate welfare will somehow reduce economic growth is an oft-repeated assertion for which no evidence is offered. To the contrary, common sense and the direct personal experience of almost everyone suggests that slightly higher taxes (and we are talking very slight here) if anything spur people to work harder to make up the difference.

Now compare industry to the welfare queens supposedly once thriving in offensive lassitude under Reagan or lately under Washington State Governor Gregoire. The contention here has long been that we should eliminate handouts to such people because their dependence renders them lazy moochers. In recent years the availability and amount of taxpayer support for those at the economic bottom has been sharply curtailed, and not just on those (largely fictional) freeloaders. Those recipients are all working harder, often much harder, and many more are struggling mightily as they fall deeper into poverty.

In a time when corporations are gaining the stature of personhood, I wonder which way the incentive works. Does giving money to those who don't need it make them work harder or less hard? With corporations I think I know the answer, but in any case, it is time to put the theory to the test, and save some money too while we're at it.
Posted by Unknown at 11:33 PM