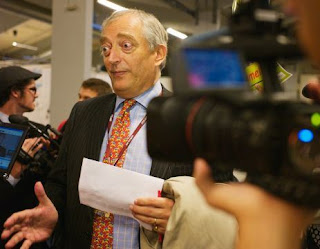 The hereditary peer, who is not a member of the House of Lords, took the chair of Myanmar and spoke into the microphone against U.N. climate change protocols.

After a short speech, in which he was booed, he was escorted out of the meeting by UN guards.

He is understood to have claimed there is no global warming in the last sixteen years, and therefore the science needs to be reviewed.

Claiming to represent Asian coastal nations, he is understood to have said: “In the 16 years we have been coming to these events there has been no global warming at all.”

Such buffoonery by Monckton is not new.

Monckton had his credentials to the conference permanently revoked, and his visa cancelled. He was to leave the country in 24 hours.