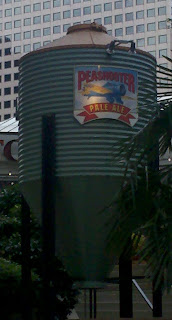 Last week's picture shows the eagle from the very top of the famous Seattle PI globe, and, given the fretting about the Mayan calendar lately, seems a timely choice, perched as it is at the end of the world. 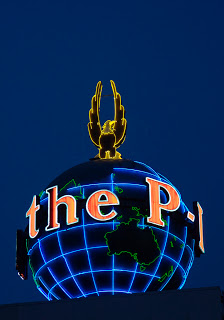 
The globe originated from a 1947 readers' contest to determine a new symbol for the paper, to be placed atop the paper's then-new headquarters building at 6th Avenue and Wall Street. When the newspaper moved its headquarters again in 1986, to its current location on the waterfront, the globe was relocated to the new building. Over the decades since its first installation, the globe has become a city landmark that, to locals, is as iconic as the Space Needle. A stylized rendering of the globe appeared on the masthead of the newspaper in its latter years and continues to feature on its website. In 2012, the globe was donated to the Museum of History and Industry for refurbishment and relocation.