Where Does It Go? 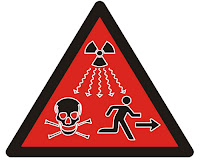 ~ Hazardous waste requires proper disposal so the hazard doesn't do damage, but what happens when no one is paying attention to the waste?

The Marcellus shale has a lot of radioactive uranium and radium-226 in it. As a result, the large volume of wastewater created by fracking is highly radioactive.


[U.S. Geological Survey research geologist Mark] Engle co-authored a USGS report that found that millions of barrels of wastewater from unconventional (fracked) wells in Pennsylvania and vertical wells in New York were 3,609 times more radioactive than the federal limit for drinking water and 300 times more radioactive than a Nuclear Regulatory Commission limit for industrial discharges to water.


Over time, as potential NORM hazards have been identified, these industries have increasingly become subject to monitoring and regulation. However, there is as yet little consistency in NORM regulations among industries and countries. This means that material which is considered radioactive waste in one context may not be considered so in another. Also, that which may constitute low-level waste in the nuclear industry might go entirely unregulated in another industry.

Currently the gas fracking industry faces little regulation on NORM, which might explain why the industry is pushing so hard both for expedited permits without deeper scrutiny, and for regulation being done at the state level, where this kind of expertise is generally lacking. While the profits can be made today, the negative health and environmental effects won't show up for many years. Meanwhile, where exactly is that waste going? Adam Kron, attorney for the Environmental Integrity Project, speaks the disturbing truth:


As fracking has rapidly expanded, we’re seeing much more of this radioactive waste, which is a problem, since traditional landfills and wastewater treatment plants aren’t accustomed to handling it. In fact, wastewater treatment plants aren’t able to remove radioactivity, and we’re starting to hear accounts of landfills receiving -- and sometimes turning away -- radioactive cuttings and sand from across state lines.

And then where do they take it?
Posted by Unknown at 11:57 PM