A Broader Tax Base

The Camel's Nose Under the Tent 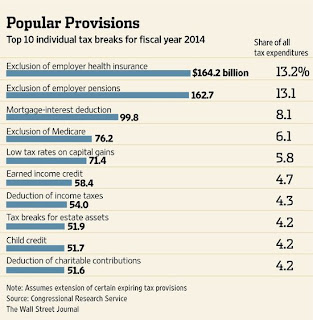 ~ Do we really want to broaden the tax base? Will it solve our fiscal problems?

The concept of a broader tax base is quite simple—it means getting more people to pay taxes who are not paying them today. In the case of income taxes (to which this term is almost exclusively applied) it means to change the tax code to make the 47% who currently pay nothing to start paying something.

Many, including Mitt Romney, are trying to have it both ways on this, suggesting that the broadening of the base would both solve the deficit and not result in any tax increases. This is not plausible arithmetic; the 47% will have their taxes raised—period. If you carve out some kinds of floors or exemptions to prevent that then you arrive back where you started—a byzantine tax code without any broader a base.

But there's more to this.

CEOs from 80 of the largest US companies today expressed their grave concern about the deficit, and especially that cowardly Congressional creation, the deus ex machina of a "fiscal cliff." Honeywell chief Dave Cote spoke for the group today, urging a "broader tax base that generates higher revenue."

The CEOs, in a previously released statement from Fix The Debt said


Any fiscal plan "that can succeed both financially and politically" has to limit the growth of health-care spending, make Social Security solvent and "include comprehensive and pro-growth tax reform, which broadens the base, lowers rates, raises revenues and reduces the deficit."

Coupled with the promise to also lower rates, broadening the tax base amounts to moving towards a flat tax. It means making the income tax less progressive by making the wealthy pay less while making those with less income pay more.

It's certainly newsworthy that CEOs are calling for revenue increases, i.e. higher taxes. They see it as both essential and as inevitable, regardless of the outcome of the elections. Mark Bertolini, CEO of Aetna:

The outlook was more bipartisan than the political affiliations of the CEOs.


[AT&T CEO Randall] Stephenson, a Romney backer, regards tax increases as unavoidable. "When you talk about a $16 trillion debt, I don't see how you can avoid addressing both sides," namely spending cuts and tax increases. Asked about the difference between his position and Mr. Romney's, Mr. Stephenson said: "This is bigger than any one political candidate."

Almost everyone agrees that the tax code is too complicated and should be simplified. That simplification provides an opening to raise the additional revenue that all serious observers recognize is both necessary and inevitable. That will likely be accomplished not by raising rates but by ridding it of deductions, credits and exceptions, and there will be staunch resistance to every elimination. One person's or industry's critical incentive is another's loophole.

So, taxes will have to go up and, if you believe Mitt Romney, it won't be on the rich. But you needn't believe Romney's latest position; money itself speaks with a clear and consistent voice. The political war chests of big company CEOs and of the powerful banking, fossil energy, insurance, drug and other industries are enormous. In our lobbying-driven legislative process, and thanks to Citizens United, they can be deployed as loudly and broadly as needed to get desired results.

What politicians, business honchos, "bipartisan" groups and the business press really mean by broadening the tax base is raising your taxes.