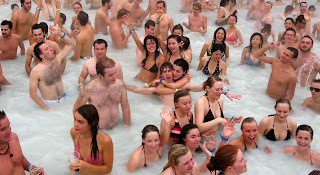 ~ Under President Obama none of the banksters that nearly destroyed the world economy have been charged with breaking the law. None, even though examples of criminal activity are rife.

Iceland did it differently:


So Iceland decided not to follow the rest of the world by bailing out the bankers. Instead, they chose to arrest them. Now their economy is recovering faster than the EU and the United States...

At the start of the world wide 2008 economic collapse, Iceland was in worse shape than almost any other country in the world. Now they are one of the fastest growing economies in the world.

Imagine what America would be like today if we bailed out the victims of poor banking practices, while punishing the bankers who were responsible?


Challenger Mitt Romney certainly isn't talking about an alternative approach either. None of the banksters are likely to be charged with anything. They've looted the country and gotten away with it. With the banks bigger than ever, the might will do it again. No lessons have been learned.

It could have been different.


I shall be telling this with a sigh
Somewhere ages and ages hence:
Two roads diverged in a wood, and I,
I took the one less traveled by,
And that has made all the difference.
-- Robert Frost