"Nobody Learned A Lesson" 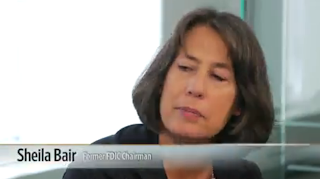 ~ Last week there was an interesting interview with Sheila Bair, former head of the FDIC by Rolfe Winkler of the WSJ. She's pitching her new book on the bailouts and the politics of why they happened, what happened, and what should have happened.

The key point, made by many others is that "there was no accountability... nobody learned a lesson." Bondholders were made whole and taxpayers took on all the risk. There was no effort to restructure the banks or break them up, with the result that the too-big-to-fail banks are even bigger and even more powerful because they still cannot be allowed to fail (we are told.) Meanwhile, they continue to pay the same massive bonuses to themselves and take the same kinds of huge risks, knowing that they can keep their gains and losses will be backstopped by the taxpayers.

Bair alludes to the famous meme that what's good for GM is good for America, but notes that this would not appear to be true for our big banks. Bailing them out was supposed to help everyone in the economy by enabling them to provide liquidity into the economy, but it hasn't happened. The banks simply became more powerful even as the government was further weakened, becoming even more hostage to banker hegemony when the next crisis rolls around.


I look at government these days and its just so frustrating... Public confidence is at an all time low. Regular people would never dream of asking for a bailout... What about public trust and confidence... and making government work for the public again? No one is talking about that in this election.