~ A favorite claim of the Drill Baby Drill crowd is that if we produced more domestic energy (specifically oil) we would produce more gasoline domestically, leading to lower prices at the pump.

There they go again. Like the myth of trickle down economics, they keep repeating the claim, but history shows it to be false.

There are reasons for that of course. A big one is that Big Oil doesn't actually keep that new production here at home: 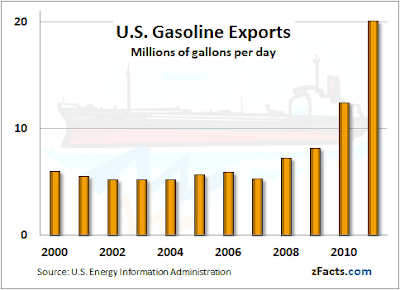 Another is that oil prices are powerfully influenced by Wall Street expectations about the future. Wall Street thinks oil prices will be higher in the future, so they bid prices up, creating their own reality. While they used to account for 30%, oil speculators now account for 67% of all of oil futures contracts. They dominate the market. Futures markets, rather than even out price fluctuations, actually exacerbate them, creating more unpredictability and pain. And more profits for the speculators.