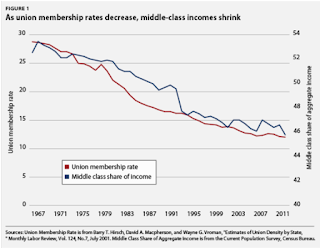 ~ The "magic" of the marketplace:
Cable has risen 2.6 times faster than the cost of living since 1995. Why do we get less and pay more?

An army of lobbyists have succeeded in the corporate capture of our government. The result is laws and regulations that favor companies over consumers. And it's true for more than just the cable company, of course; many industries are just the same: healthcare, prescription drugs, telephone service...

The American middle class is being squeezed out of existence by higher real costs for everything even as real wages have stagnated. Meanwhile, the assault on labor continues with a concerted effort to break unions, terminate pension plans, cut benefits and even extract wage concessions. All this while top executive pay continues to balloon and corporations bank record profits and sit on record amounts of cash.

When did extracting all possible wealth from consumers become the dominant business model?
Posted by Unknown at 12:24 AM