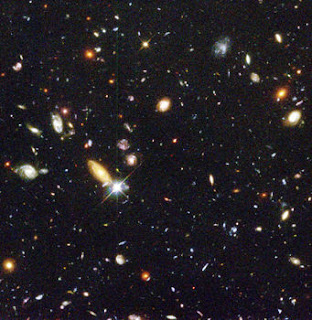 ~ A view deep into the universe by the Hubble Telescope:

The image shows 1,500 galaxies, but most amazing is that it spans such a minuscule part of the sky—the width of a dime from 75 feet away.

But which is more incredible—the technology and the image it captures, or that we as a nation found the political will and funds to develop, launch and operate such a marvel?

Our history is filled with examples of bold visions pursued and realized by ourselves as a nation through the agency of our government. Many have resulted in broad technological know-how with enormous commercial opportunity. Legions of companies have successfully turned that into money-making enterprises that have fueled what is still the world's largest economy.

Some now champion a pinched austerity as the solution to our economic problems. It's the exact opposite of what we need as history both old (the Great Depression) and new (Greece) clearly shows.

It would also destroy unique sources wonder. Not just a telescope program, or any number of other programs, or mere images from space, but also the robust economy that such national undertakings enable.
Posted by Unknown at 11:55 PM